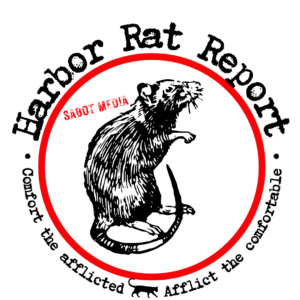 The Harbor Rat Report is a grassroots journalism project updating the Grays Harbor community on stories around radical rural resistance, political direct actions, community organizing efforts, housing advocacy projects, and much more. We see a distinct lack of credible investigative reporting on topics of vital importance to our community. We will investigate and write the stories that aren’t being told in this capitalist media landscape.

We are the inky ones. Flashing eyes in the dead of night. Our claws are sharp, our wit sharper. Start a Black Cat Distro and join in this revelry by printing this stuff yourself. Give it to a friend, leave it at a bus stop, wheat paste it behind a dumpster, fill your personal library, sell it to raise money, wad it in the neck of a glass bottle and throw it to sea, shred it for a pinata of your local politician, use it as tinder for a fire somewhere fun, tie it to a rock and throw it through a police station window, become ungovernable. You can join us, we print posters, stickers, & zines. When sabot media makes content we sneak in the night to seize it and make it our own. We chop it up, rearrange it to our liking, and then hit Crtl-P. We toss this garbage all over town in the hopes someone will read it. 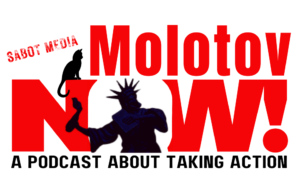 In Molotov Now! We analyze and discuss articles shared by The Harbor Rat Report and other stories of resistance across the globe with a focus on rural organizing. The unique dynamics of community organizing in small towns, and the often reactionary rural politics we face leads to special tactical considerations that we feel urban comrades need to learn from. In the spirit of building solidarity between the rural & the urban and inspiring direct action in the face of capitalist oppression. We seek to discuss the many and various tactics and actions taken by rural organizers and connect them to the actions of urban organizers. 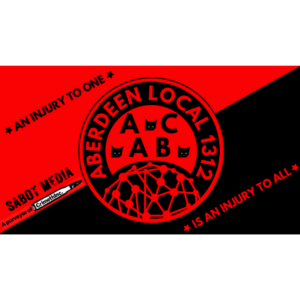 Aberdeen Local 1312 is our connection to the capitalist forms of social media on Facebook, Twitter, Instagram, Youtube, & Tik Tok as well as decentralized forms of federated social media such as Mastodon. Through these platforms we intend to share everything from long form videos to short digestible nuggets of content, right down to the dirty core of an idea – the meme. We’re fighting the propaganda war on an unfair battlefield, but it still has to be fought. If we wish to win the battle for a free internet, we must change the battlefield. We need to work together to shift our movement as a whole onto the federated internet. So long as our personal connections remain on their servers our Union and our movement, can and will be deleted. This is the goal of Aberdeen Local 1312 & The Agit-Prop Memer’s Union. Everyday our data and information is stolen and sold off for profit, leading to some of the most violating and deceptive practices by social media companies and advertisers. Just as we must decentralize power and the means of production, so to must we decentralize the internet. Why should social media companies profit from our labor!? Its time seize the memes of production!

The Communique is a seasonal newsletter that combines stories of regional rural organizing efforts & political resistance, along with local history, art, and poetry to update our comrades in the wider culture of resistance. We feel a lack of representation in what has become a one way relationship between rural and urban radicals. By connecting our stories to the struggle for liberation across the globe, we aim to foster a culture of learning and bridge the divide between the two in order to strengthen the bonds of solidarity between all our communities. The Saboteurs takes us on the journey of a wild cat named sabot and his companions, both human and animal. We see how a fictional character might partake in praxis on the streets of their city. The critters of the forest aid sabot in his wanton destruction of the old world. They watch gleefully over the ashes as something new begins to take root. Join the pack of militant creatures as they make their way into this bright tomorrow. 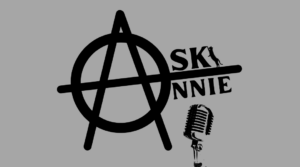 Ask Annie is a column where a core organizer answers your questions on local current events, how to’s, organizing tips and tricks, and much more. Annie spends her days out helping people on the streets and often gets asked the same question over and over, often about resources or how people can get engaged in their community. We figured our audience would benefit from being able to have these questions asked and answered in one convenient spot. So send your emails our way and we will make sure she sees them.